Richard F. Pettigrew first came to Dakota Territory in the summer of 1869 as the head of a land survey crew.

After attending law school in Wisconsin, he returned to Sioux Falls in 1870 and established his home here. He was active in political affairs and was elected a territorial delegate to Congress in 1880. He was influential in promoting statehood for South Dakota. When South Dakota became the 40th state in 1889 he was one of the state’s first two senators. 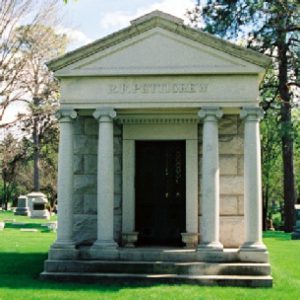 After serving two terms in the senate he returned to Sioux Falls to practice law and to pursue his interests in political and civic affairs.Pettigrew’s involvement as as officer of the Rosehill Cemetery Association in New York City sparked his interest in establishing a cemetery in the growing city of Sioux Falls. When a 70 acre tract of land in the outlying southeast corner of the city was offered for sale, he bought it with the express purpose of using it for a cemetery. He paid the $8,750 purchase price from his personal funds.

The entire amount, plus interest, was repaid to him as the cemetery association’s funds slowly accumulated. In the winter of 1922, an adjacent 10 acres were purchased from a private owner. These 80 acres, bounded on the north by 26th Street, on the south by 33rd Street, on the east by Cliff Avenue and on the west by residential lots fronting on 7th Avenue constitute all of Woodlawn Cemetery. More than half the area has been plotted and sold; the southern section will be used for future expansion.

By November 1911, 82 family lots and 26 single grave spaces had been sold. During those early years charges were figured at $.30 per square foot of space. Grave spaces were furnished free of charge to the South Dakota Children’s Home; thirteen had been used by the year 1911.

In the decade 1910 – 1920 the cemetery’s assets were growing rapidly, a fact attested to by the minutes of 1918 authorizing the secretary to rent a safety deposit box for bonds, mortgages and securities. A separate account for Perpetual Care was established, and the Board of Directors wisely predicted that lot prices would need to be increased within five years.

The year 1926 marked the death of the chief developer of Woodlawn Cemetery, Richard F. Pettigrew.

He had remained active in all aspects of the cemetery’s management and growth from its very beginning. The beautiful arch at the 26th Street entrance, made of stones from the petrified forests of Arizona, is one of his great achievements and will remain a lasting tribute to this energetic man.

For some time it had been thought desirable to have a more distinctive entrance to the cemetery. A June, 1932 Board decision resulted in the purchase from Jasper Granite Company of Jasper, MN, of two stone piers 3’ x 3’ x 8’ and six stone piers 2 ½’ x 2 ½’ x 6’. One large and two smaller piers were placed on either side of the 26th Street entrance. The two remaining piers were placed at the south entrance off 33rd Street.

In 1954 the Board contracted with Henry Carlson Construction Company to erect the 30’ x 60’ combined office and shop at 2001 South Cliff Avenue.  After “making do” with small offices in at least three downtown buildings for more than 50 years, the secretary and Board members felt very fortunate to have new and attractive quarters.  The new location on the cemetery grounds proved to be much more convenient for the secretary, maintenance people, the Board of Directors, and the public.

The population of Sioux Falls increased from 65,466 in 1960 to 72,488 in 1970.  Residential area business places such as branch banks, service stations and convenience stores opened.  A request from Standard Oil Company to buy or lease the northeast corner of the cemetery was denied.  During this period six new sections of the cemetery were opened.  The trend toward paying for pre-need lots and interments necessitated the beginning of an installment payment plan.

In 1970, H. W. Stellner who had served 13 years as secretary of Woodlawn Cemetery died wile still in office.  The Board advertised for applicants for the new position of “manager,” a term which is more descriptive of the job of overseeing the day-to-day operations of the cemetery.

In 1972 the office and shop building was enlarged to make more space for safekeeping of records.  A new exterior of heavy timbers and stucco, mansard roof and window grills made the building more attractive and secure. 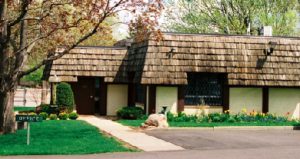 A beautiful sculpture was placed in the Crown Hill section of the Cemetery in 1973.

The generous donor is Miss Maxine Cook whose parents are buried nearby.  The sculpture, made of genuine Carrara marble, is a life size statue of St. Francis of Assisi. 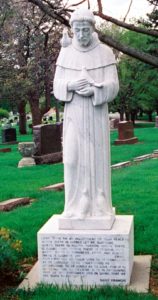 It is an original commissioned work by a registered Italian artist.  St. Francis was a beloved worker among the poor in 13th century Italy. He gave up a life of ease and riches to minister to those less fortunate.  He saw divine wonder in all nature and is often shown with birds and animals surrounding him. St. Francis is the author of the familiar prayer, “Lord, make me an instrument of thy peace.  Where there is hatred, let me sow love; where there is doubt, faith; where there is darkness, light and where there is sadness, joy.”  A 24-inch base of Carrara marble supports the statue.  In 1989 a stoneworker placed the words of the prayer on the base, making the statue even more meaningful to all who see it.

During the decade of the 1980’s, the cemetery found that they were receiving an increased number of requests for burials of cremains.  In 1985, after a considerable time spent investigating the best size, design and location, the Board purchased a 96-niche Columbarium. 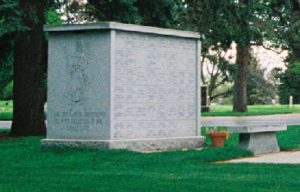 Concurrent with its purchase, decisions were made about the cost of niches, rules and regulations concerning their use, and the type of lettering on the outside.  It was also crucial to choose the best location in the cemetery, bearing in mind that future needs may require the placing of  additional units. The site selected was the southwest area of Memorial Parkway, a beautiful place that is easy to locate.

Through the years, the cemetery has been very fortunate to have the support of its many lot owners and friends.  Gifts were given to the Perpetual Care Fund for the purchase of trees, and money from wills has been used for many purposes, such as the brightening up of flower beds and installation of granite benches.

An overall view of accomplishments at Woodlawn Cemetery during this decade reveals some impressive facts and figures:

–  A condensed financial statement was prepared by the Board of Directors for distribution to lot owners.

–  Valuable Pettigrew and Beebe papers were presented to the Siouxland Heritage Museums as a result of    research done for a historical brochure about the cemetery.

–  Future expansion areas in the south part of the cemetery were drawn into plots and named.

–  The cemetery cooperated with the City of Sioux Falls in the project to widen the intersection of 26th Street and Cliff Avenue.  The Cemetery Association deeded 25 feet of the northeast corner of the  cemetery to the city.  Woodlawn also graded down the elevation at the corner to improve overall landscaping. One stone pier was removed and a matching stone pier was constructed to follow  Woodlawn’s tradition of having a pier at every corner of the cemetery.

During the 1990’s the Woodlawn staff continued to maintain and enhance the cemetery.  Old trees were removed and replaced with new trees in more suitable locations.   New areas of the cemetery were surveyed, with new plots designed and roads extended into the new areas.  Constant attention was paid to the health of the lawns, trees and shrubs.  Much needed equipment was also purchased.

In 1990 the first hospitality tent was erected for the Memorial Day weekend.

In 1998 the board authorized the purchase of a second Rock of Ages columbarium.  This 96-niche building has larger niches to accommodate taller and wider cremains containers.  There is space provided in the Memorial Parkway for additional columbariums in the future. 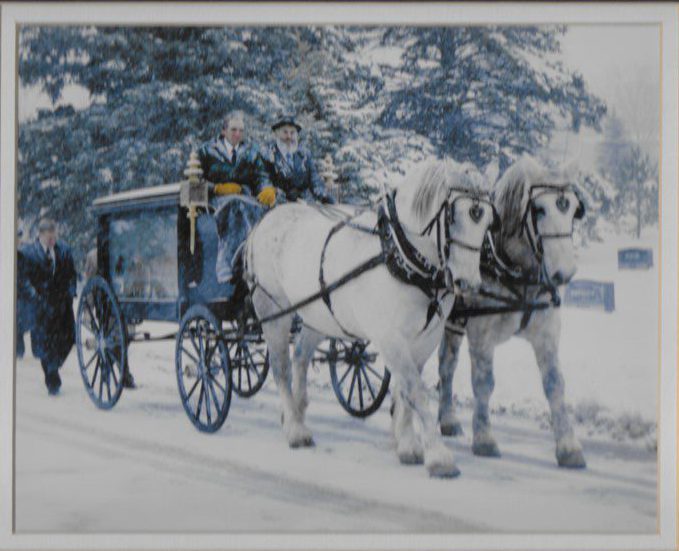 Once the funeral coach was inside the 26th Street gate, Mr. Tschetter was transferred to a horse drawn hearse.  The windowed, curtained hearse and the dapple gray Percheron horses pulling the hearse are owned by the Tschetter family. There was an entourage walking in front and in back as he was transported through the cemetery during a beautiful light snow to his final resting place.